Pearl engine deliveries pass the hundred mark
The Pearl 15 is built in Dahlewitz near Berlin, and was custom-designed for Bombardier's Global 5500 and 6500 aircraft types. In total this factory has delivered more than 1,800 engines of all types to the manufacturer. 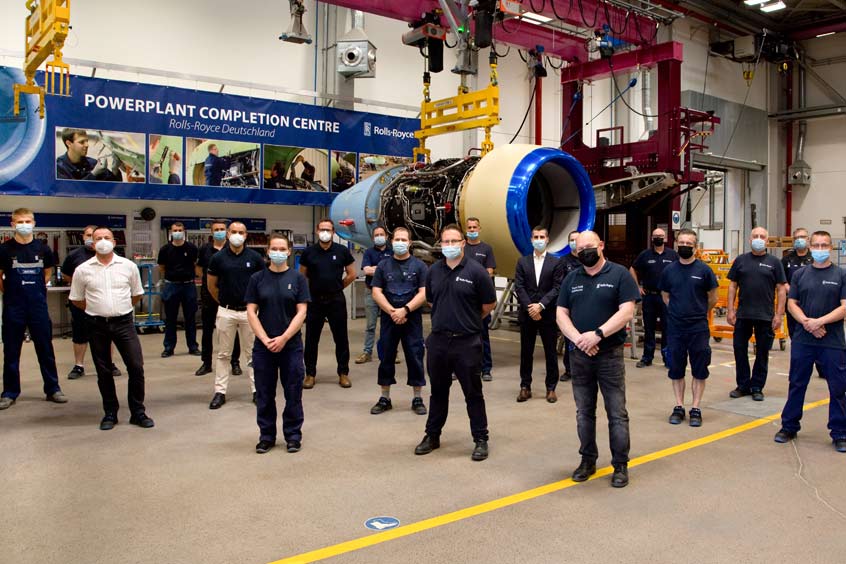 Marking the one hundredth Pearl.

Rolls-Royce has delivered the 100th Pearl 15 engine to Bombardier for the Global 5500 and 6500. The engine, developed and built in Dahlewitz near Berlin, Germany, is the first member of the Pearl family, and was custom-designed for these aircraft, which have the longest range and the largest cabin in their category.

The Dahlewitz site, which has delivered more than 1,800 engines overall to Bombardier to date, started production in June 1995 and today employs approximately 2,500 people. As Rolls-Royce's centre of excellence for business aviation engines, the site has an important role in our global manufacturing and development footprint.

In addition to the Pearl family, the BR710 and BR725 business jet engines are also assembled at the facility. Dahlewitz is also home to the development and testing of Rolls-Royce's new power gearbox for the UltraFan demonstrator. This demonstrator is the basis for a potential new family of UltraFan engines, which will be able to power both narrowbody and widebody aircraft and deliver a 25% fuel efficiency improvement compared to the first generation of Trent engine.

Nuno Taborda, senior vice presi​dent production programmes, Rolls-Royce Deutschland, says: “This engine delivery milestone is important for us, demonstrating the programme's maturity and confirming our confidence in the potential of the Pearl family. I would like to thank everyone at Bombardier for their continued close teamwork with us to make this aircraft and engine such a great success.”