Helicopter focus: Squirrel harvests walnuts for impatient farmers as helicopters air their commercial versatility in France and the frozen north
Farmers in the Grenoble region of southeastern France, impatient at the apparent reluctance of walnuts to fall from trees on time, used a low-flying helicopter to hurry the harvest.

Farmers in the Grenoble region of southeastern France, impatient at the apparent reluctance of walnuts to fall from trees on time, used a low-flying helicopter to hurry the harvest. An Ecureuil, the French name for squirrel, flying three to four metres above the trees, produced a rotor downwash on the branches powerful enough to shake free all of the walnuts in one concerted flight. Walnuts harvested by helicopter subsequently went on sale exactly when the farmers wanted them to.

Georges Moulin, director of Jet Systems which performed the mission, says helicopters are already used to dry the vines of wine growers. He adds: "The helicopter is not more expensive than traditional methods and it is more effective and more reliable, and entirely environ-mentally friendly. In two missions of three hours each, the helicopter can cover some 200 hectares, harvesting in hours what the farm machinery usually takes days to accomplish. Plus, the roots of the walnut trees, which are very close to the surface, were in constant danger of being exposed by machine harvesting. The helicopter has no effect on the trunk or root system."

Walnut harvesting is just one example of how the use of helicopters is being expanded in southern Europe as well as in the far north where they are recognised as being essential transport. They are the only means of transport in the most northerly latitudes, apart from aeroplanes equipped with skis, particularly on Greenland where there are almost no roads and the coastal transport routes are blocked by ice for part of the year.

Air Greenland operates 11 AS350 Ecureuils. "These helicopters are in particular demand for use in mineral exploration, which is carried out in an ecological way in Greenland," says Hans Peter Hansen, director of Air Greenland's charter and cargo division. "One local company, and also several companies from Canada and even Australia, use our helicopters to transport their geophysical detection instruments either inside the aircraft or externally. These instruments can detect all types of ore non-destructively. This year, an American company has even chartered two Ecureuils on a full-time basis to allow its scientific teams of archaeologists, biologists and geologists to decide on the best locations to establish its smelters and hydroelectric power stations from an environmental point of view."

Other Ecureuils are also being used for scientific missions on the ice fields for the Danish Meteorological Institute and Veco Polar Resources which organises the logistics for the US National Science Foundation, NASA and several universities.

The same electromagnetic technique is used by the Swedish company Westhelicopter AB in all of the Nordic countries, working on behalf of the Danish private geophysical exploration company, SkyTEM. This technique is also applied to the detection of natural water reserves in the ground.

SkyTEM says it has been developing this procedure since 2004 using an advanced process which consists of a radar antenna array deployed 30 metres below an AS350 B2 helicopter, on a rigid, hexagonal structure. It flies at a maximum height of 30 metres above the ground, with the height controlled by laser, and at a speed of 25 knots.

"The radar can provide extremely accurate information to a depth of 350 metres and its endurance is approximately three hours, which is a real plus for this type of mission," explains the helicopter's pilot, Benny Lindberg. Westhelicopter also operates EC120 B Colibris.

The Norwegian company Pegasus Helikopter AS specialises in the fertilisation of lakes and rivers, and sometimes certain areas of land. It has been performing missions for the Norwegian Ministry of the Environment using AS350s since 1999. Director of operations, John Glenne says: "These missions involve ensuring the ecological balance of the country's entire natural water system and combating pollution to boost the reproduction of the most sought-after fish, such as trout, and the flora that they need."

The work mainly involves treating the water in the hills and mountains so that the benefits flow down through the streams and rivers. Glenne says: "These missions are therefore performed in places that are often inaccessible, which requires major logistics planning. An operation consists of pouring hundreds, even thousands of tonnes of fertiliser, from tanks attached to the end of a sling in several round trips." Glenne says the Ecureuil's power reserve, comfort and reliability are attributes that make it suitable for such missions. "Its proven reliability is such that the team does not take along a technician even for a mission lasting several days."

In the North Sea Uni Fly A/S has flown around 13,000 maintenance operations on 80 wind turbines since its first EC135 was delivered in 2002. Helicopter maintenance manager Frank Petersen says: "This helicopter only flies in bad weather because, when the sea is calm, the technicians can be transported by boat." The EC135 lowers two technicians three or four metres to a specifically designed platform on the wind turbine more than 80 metres above the sea," Petersen says. "The EC135 has a large cabin and provides high levels of safety for hoisting operations. It is able to withstand the wind, which allows it to remain stable; and the right conditions are maintained in which the hoisting can be completed if one of the engines should fail."

Separately 10 helicopter pilot trainees of Kuwait's police department have graduated through Tiger Helicopters based at Shobdon Aerodrome near Leominster in the UK. "The pilots were specif- ically chosen to fly with Tiger Helicopters following gruelling aptitude tests in their home state," says md Alan Ramsden. The course consisted of learning to fly the "basic but effective" Robinson R22 training helicopter, followed by a transition onto the Bell 206 single turbine JetRanger. "Having attained a good standard of flying on both of these machines, which included navigation exercises, winching and load lifting, and search and rescue, they then began training on the police-equipped AS355 Twin Squirrel, which honed their skills in vehicle pursuit, surveillance and night operations," Ramsden adds.

Final training focused on instrument flying in the Agusta 109, including flying in cloud formations. 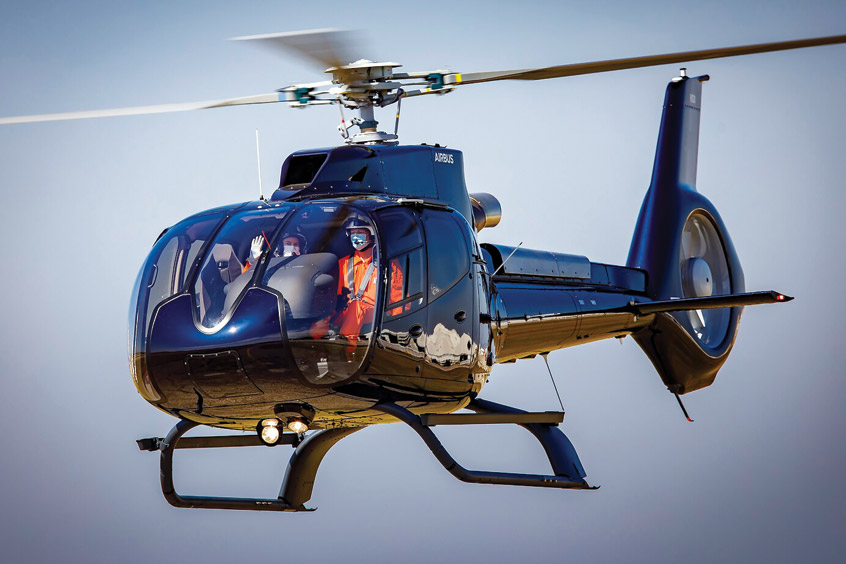