Read our latest feature:   Checklist: Aircraft finance
Thanksgiving likely to usher in plenty of private flying
European business jet demand continues to break records, with the first half of November 2021 surging 28 per cent above November 2019. Midsize jet, very light jet and super light jet flights are 40 per cent above normal.

WingX reports that transatlantic traffic in business jet activity has rebounded in November since the loosening of COVID restrictions on inbound arrivals to the US. Down by 27 per cent for the year-to-date, when compared to 2019, arrivals into the US from Europe this month are 161 per cent higher than in November 2020 and a record-breaking 11 per cent higher than in November 2019. Scheduled passenger services are slower to respond, being still 35 per cent lower than the comparable November 2019, even if the month so far shows an 80 per cent snap-back on last year's traffic. Fractional fleets got the biggest jump, with transatlantic sectors up by 55 per cent compared to November 2019.

US operators are looking ahead to very strong demand for the Thanksgiving Holidays starting on 25th November. Back in 2019 the 28th November to December 1st period saw 23,675 business jet sectors operated, with the much-subdued 2020 holidays seeing a 16 per cent dip in that activity. On current trends, this year's holiday will put fleet capacity under extreme pressure with as much as 20% increased demand, which is likely to fall heaviest on card and fractional programmes. The footprint is likely to resemble pre-pandemic patterns, with Thanksgiving 2019 highlighting East and West Coast connections. Back then, there were at least 50 business jet connections during the four-day holiday between Teterboro and West Palm Beach, Dallas and Los Angeles, Teterboro and Boston, and San Antonio and Monterrey. The busiest jets were Challenger 300/350, Citation XLS and Phenom 300 types.

European business jet demand continues to break records, with the first half of November 2021 surging 28 per cent above November 2019. Midsize jet, very light jet and super light jet flights are trending over 40 per cent above normal. Having spent most of the year at the back of the recovery trend, the UK has had more flights so far in November than any other country in Europe and 26 per cent more than in comparable November 2019. Farnborough was the third busiest airport in Europe while Biggin Hill is ranked ninth, with an almost 50 per cent increase on a comparable November 2019. Germany's domestic market is the busiest, although 13 per cent below two years ago. UK-France is the busiest international connection, with 300 aircraft flying 32 per cent more sectors than two years ago.

WingX MD Richard Koe comments: “Business jet operators will be preparing for the Thanksgiving Holiday demand with some trepidation, with ongoing demand for flights still breaking all-time records. Growth is even stronger in Europe, although there is relatively more slack capacity in the fleet than in the US. Transatlantic sectors have also burgeoned. Other regions have seen a relapse, notably in China.”

Avionics business continues trend of growth
The AEA is encouraged by growing sales, but worries about inflationary pressures. The effort by avionics OEMs to manage the flow of products while dealing with supply constraints and increasing costs is extraordinary.
Read the full report 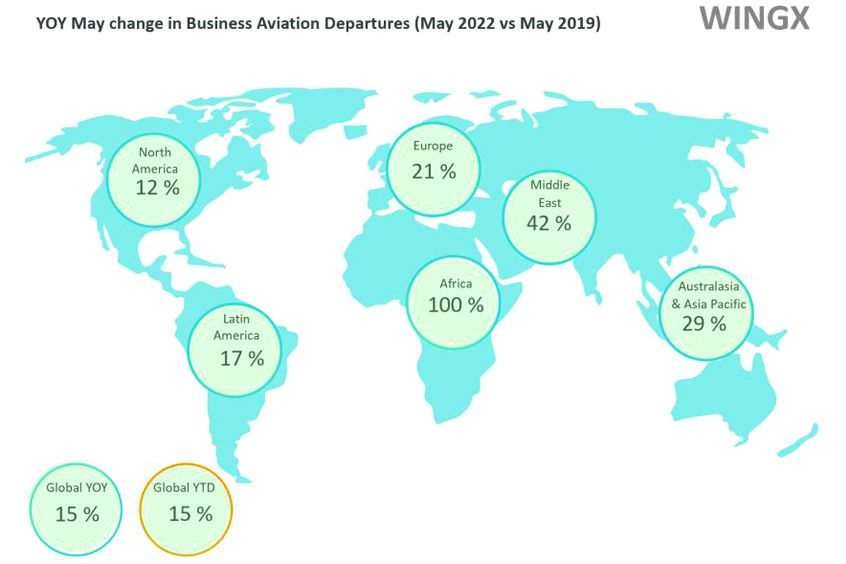 Strong if patchy flight recovery in South America and Caribbean
The region’s post-pandemic recovery is robust and aircraft acquisition is bullish, but can it hold? WingX Advance managing director Richard Koe considers the likelihood of this trend being sustained.
Read the full report