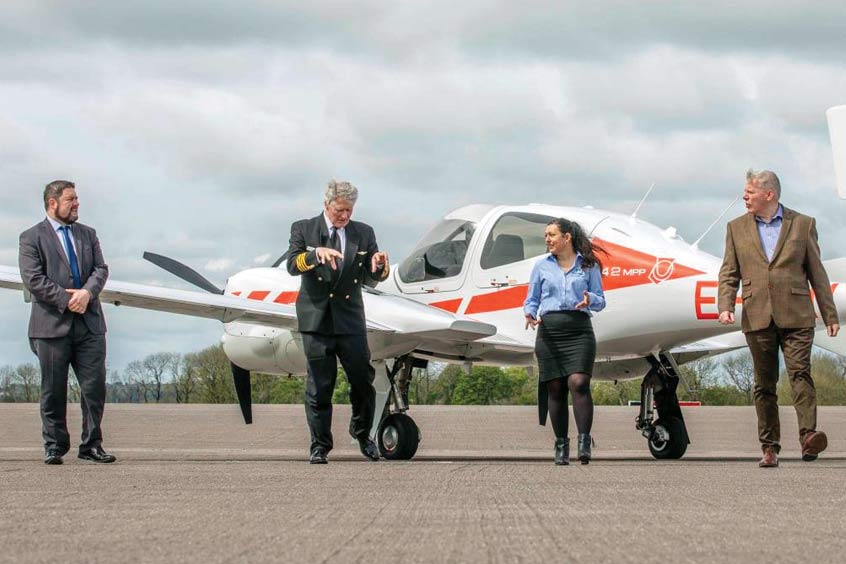 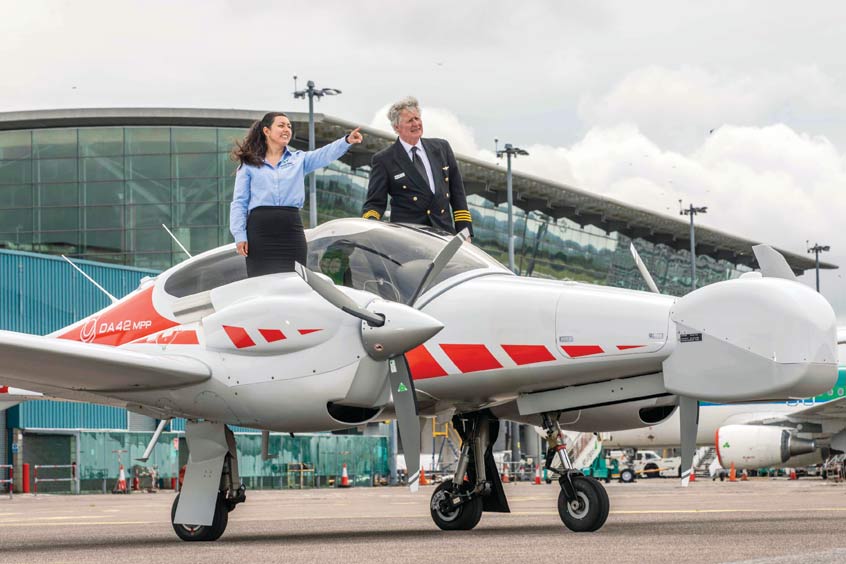 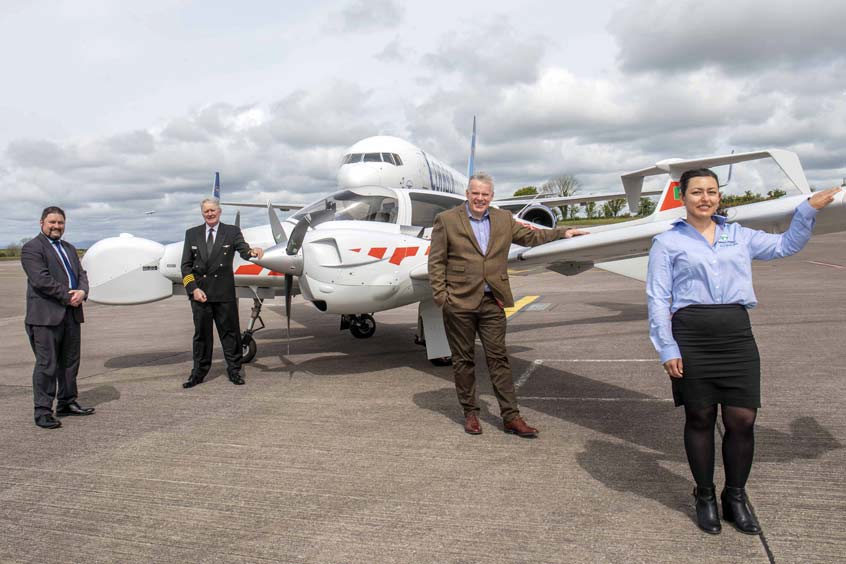 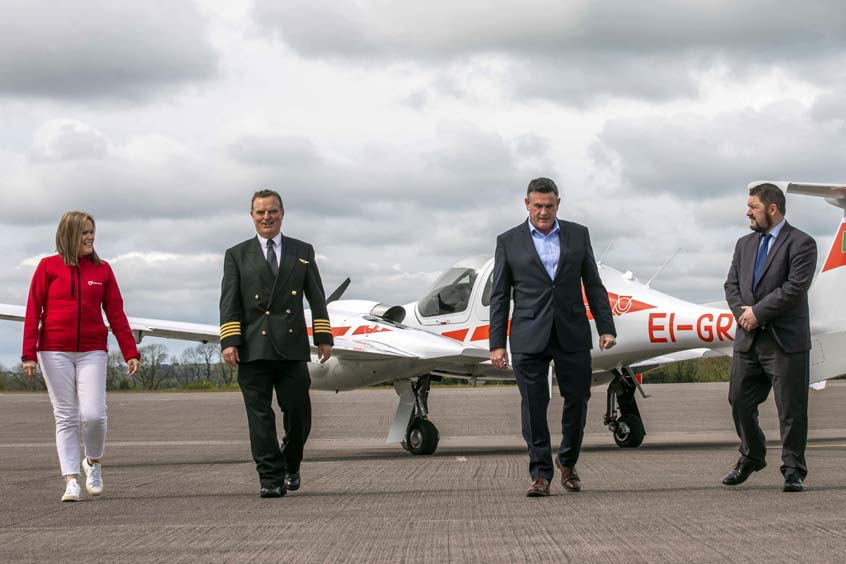 The first digital aerial ecology surveys of Irish coastal waters to be undertaken by a domestic company are about to begin following the arrival of a new special mission aircraft owned by Green Rebel Group out of Cork airport. The company is leading efforts to establish Cork Harbour as a green energy hub, beginning with a new partnership between Green Rebel Group, Atlantic Flight Training Academy (AFTA), Cork airport and Weston Aviation.

Green Rebel Group acquired the aircraft to undertake ecological assessments as part of the planning process for marine renewable energy projects, including offshore wind farms. The new 1.5 million euro twin-engine Diamond Air DA42 aircraft will be used to survey thousands of square miles of ocean. The DA-42 is the most environmentally-friendly aircraft of its class on the market, in keeping with Green Rebel Group's mission to reduce the dependence on energy from fossil fuels. The aircraft, with tail registration EI-GRM, will be permanently based at Cork.

With the purchase of this aircraft, Green Rebel says it will be the only domestic Irish company offering digital aerial surveys for ecological assessments associated with marine renewable energy projects. It has partnered with Cork airport-based flight school Atlantic Flight Training Academy, which will be the specialist operator for the aircraft. The aircraft will be based in the hangar of Weston Aviation, the FBO at Cork airport. Its arrival has resulted in the creation of 15 direct jobs, and there are plans for further job creation over the coming years.

Each aerial survey flight will generate terabytes of high-quality imagery. In order to store, process and backup this data, Green Rebel Group has also built a marine data centre. The high-spec server and supporting IT infrastructure are housed in a secure location at the Cork airport business park. The data will be used to map the abundance of marine wildlife, which is critical to ensure wind farms are built in the most suitable locations.

Green Rebel head of aerial surveys Sarah Kandrot says: “This aircraft will help us to compile information that will ensure offshore wind farms are built in the best locations to protect the ecology of the ocean. We are delighted that our aircraft has arrived in Cork, which means we can now begin conducting these important surveys. With this aircraft, large sections of the ocean can be surveyed over a shorter period of time than can be achieved with traditional boat-based surveys. Thanks to the ultra high-spec of our camera equipment, our aircraft will be flying at heights that will not cause any disturbance to birds or marine megafauna while at the same time allowing us to collect the highest-quality digital imagery.”

CEO Mick Horgan adds: “I am hugely proud of the Green Rebel team and what they have achieved. We have put together an amazing team of data acquisition specialists and data scientists who are all experts in their respective fields. I have every faith that our aerial survey division will be second to none.”

AFTA CEO Mark Casey comments: “AFTA are delighted to have been chosen as the SPO operator for the specialist air survey delivery for Green Rebel Marine. It is fantastic to see local investment by GRM in aviation and marine infrastructure creating high quality local jobs for the Munster region. The Special Mission DA42 NG is an environmentally friendly low impact survey and reconnaissance platform. The aircraft is powered by the AE300 aero diesel power plant and can run on 100% algae based Biofuel. AFTA is proud to be a part of GRMs mission to reduce the dependence on energy from fossil fuels and move towards a sustainable offshore wind energy solution.”

CEO of Weston Aviation Nick Weston adds: “We are delighted to be working closely with the Green Rebel team in this exciting new venture, adding to the rapidly developing offshore operations that both Weston Aviation and Cork Airport can offer in the region. Our ideally located FBO and hangar at the airport is a perfect base for aircraft and passenger processing for these highly complex missions.”

Cork airport MD Niall MacCarthy concludes: “We are delighted to welcome the Green Rebel Group to Cork Airport. COVID-19 has provided us with opportunities to diversify our business into new areas supporting cargo, offshore gas and wind operations. As a key economic enabler for the region, Cork Airport will play a big role in the economic recovery ahead. The addition of the Green Rebel Group aircraft based here at Cork Airport will help create new job opportunities particularly in the green energy sector. The Green Rebel Marine Diamond DA42 aircraft will be based at the Weston Aviation hangar at Cork Airport, and we wish it every success in this exciting new offshore wind venture.”