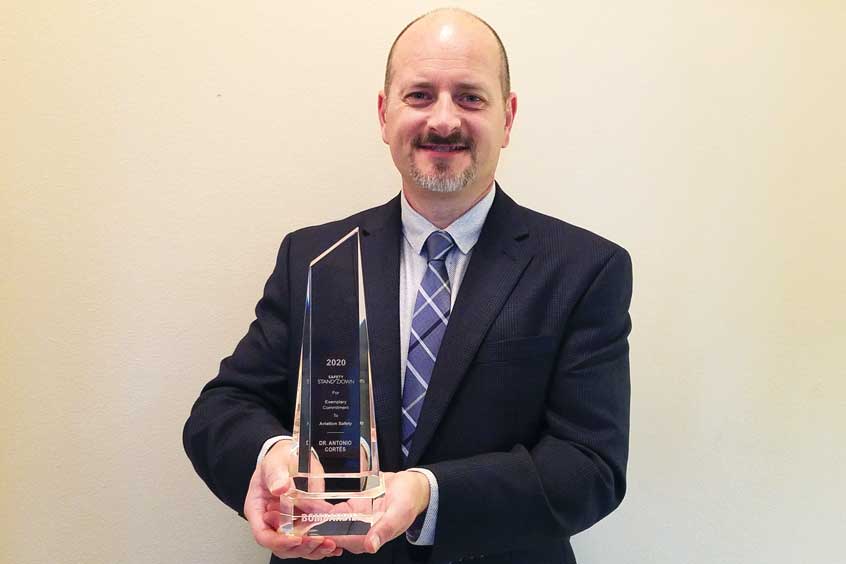 Antonio Cortés has been named the 2020 winner of the Bombardier Safety Standdown Award.

Bombardier Aviation is developing a new service centre at Essendon Fields airport in Melbourne. The new OEM-operated Melbourne Service Centre will employ up to 50 people, including more than 40 highly skilled technicians. It will boost Bombardier's customer service footprint in the Asia Pacific region by some 50,000 sq ft.

Australia is a key market for Bombardier. With more than half of the 168-aircraft strong Australian business fleet made up of Bombardier aircraft, the new facility will serve as a focal point for customers in the region.

“We are thrilled with the addition of the new Melbourne service centre, which further builds on our commitment to Australia and the Asia Pacific region,” says Jean-Christophe Gallagher, executive VP of services and support, and corporate strategy, Bombardier Aviation. “By adding more specialised know-how and greater capacity to support more aircraft in this key location, we are providing our customers with even more reasons to bring their jets home.”

“This is a tremendous outcome for Melbourne, and it solidifies Essendon Fields as the home of corporate jets in Australia,” adds Essendon Fields CEO Brendan Pihan. “The site will now attract a sizeable proportion of all Bombardier aircraft in the region to Victoria for aircraft service and maintenance. This is a long-term commitment, by both parties. With this announcement, we demonstrate a strong commitment to the future of aviation at Essendon Fields.”

The new facility will provide customers with a variety of service options including scheduled and unscheduled maintenance, modifications, avionics installations and AOG support for Learjet, Challenger and Global aircraft. It will also have the capacity to service two Global 7500 aircraft at one time. The new service centre will also boast a 4,000 sq ft parts depot. Construction is set to begin this year, with the facility slated to be operational in 2022.

Corey Trudgen, the former general manager of the Biggin Hill service centre, will assume the same role at the new facility in Melbourne. He brings more than 25 years of experience in aviation, and he started his aviation career as an aircraft technician in the Royal Australian Navy before moving to a number of increasing roles of responsibility in the airline industry. He joined Bombardier in 2015 as a field service representative, and quickly moved to leading the Biggin Hill service centre as general manager since 2018.

Cortés accepted the award on 21 October during the virtually presented 24th annual Bombardier Safety Standdown. This award is presented annually to an aviation professional who has demonstrated exemplary dedication to improving aviation safety through the Safety Standdown principles of learn, apply and share.

“On behalf of Bombardier, I wish to congratulate Antonio Cortés for his unwavering commitment not only to the Safety Standdown, but also to promoting aviation safety and professionalism at all levels of our industry,” comments Andy Nureddin, VP of customer support at Bombardier. “Antonio perfectly embodies what the Safety Standdown Award stands for: celebrating individuals who are role models in the field and have made a real difference day-to-day.”