Jetflite sends Challenger 650 into COVID service
On its longest tour, a Challenger traversed three continents in five days, from its base in Helsinki to Portugal, Italy, Mali, Canary Islands, Liberia, South Africa, Seychelles, Afghanistan and Estonia to repatriate citizens. 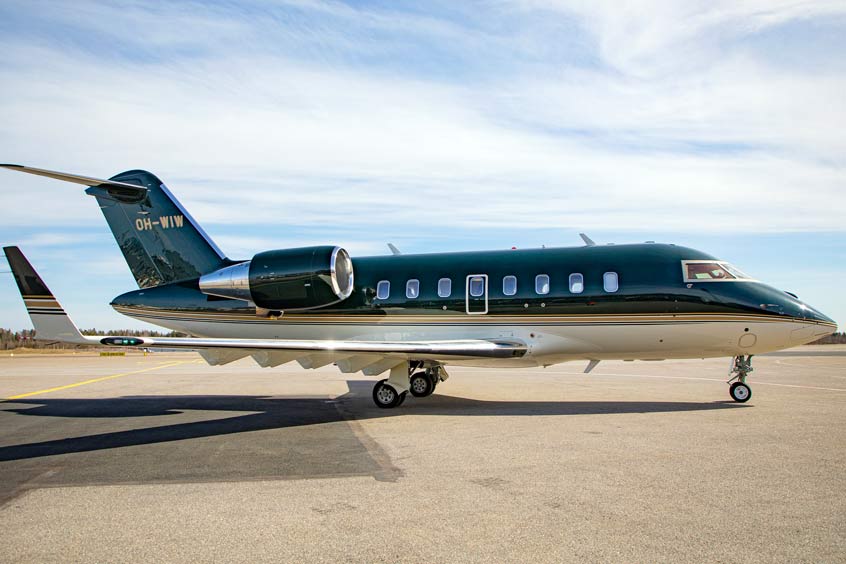 The Challenger 650 is captured during a rare moment on the ground.

Finnish charter operator Jetflite has revealed details of how a freshly delivered Challenger 650 business jet was immediately pressed into service to repatriate dozens of patients impacted by COVID-19 as airports and borders around the world shut down. True to its reputation for tried-and-true performance, the Challenger 650 aircraft performed flawlessly straight out of delivery, completing its first 100 hours in just 14 days.

The aircraft, configured for executive charter service, was delivered to long-time Bombardier customer Wihuri Group, a large Finnish industrial conglomerate, on 26 March. The aircraft is operated by Jetflite, which is owned by Wihuri Group. The unique adaptability of the Challenger 650 aircraft interior allows Jetflite to quickly transform the business jet's 12-to-16-passenger VIP configuration to an air ambulance configuration, complete with two stretchers, a portable isolation unit, personal protective equipment, COVID-19 test kits and a medical team to respond effectively to the growing worldwide humanitarian crisis.

“Our Jetflite fleet is always busy, but completing the first 100 hours inside 14 days directly out of the factory was something of a record, even for us, particularly in light of the challenges in flight route planning, obtaining diplomatic clearances and booking risk-free crew accommodation during the spread of COVID-19,” says Elina Karjalainen, managing director, Jetflite. “We are very proud to have this impressive new aircraft in our fleet, and to be able to help so many people, as we wait for better days ahead.”

On its longest tour, the aircraft traversed three continents in five days, flying from its base in Helsinki, Finland, to Portugal, Italy, Mali, Canary Islands, Liberia, South Africa, Seychelles, Afghanistan and Estonia to repatriate citizens to their home countries.

“The importance of reliability and flexibility, for which our Challenger platform is legendary, is brought into sharper focus when lives are on the line,” adds David Coleal, president, Bombardier Aviation. “We are extremely proud that our Challenger 650 aircraft is able to make a strong contribution to the important humanitarian work the Jetflite team is doing.”