Carolina releases book to document time in the air with Avanti
When Carolina Dellonte started flying the Avanti in 1998, the type was more or less unknown to clients and was a very exciting prospect. In her new book she discusses her executive career and much more. 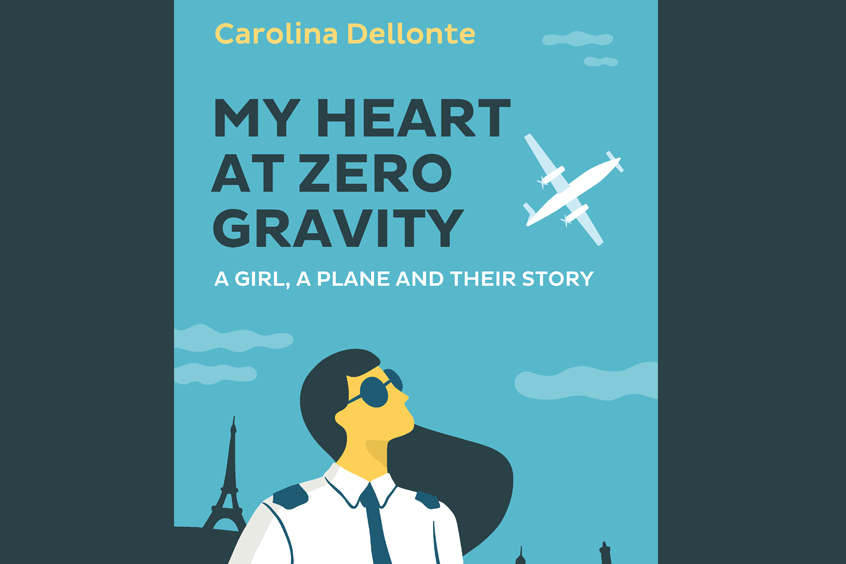 Carolina Dellonte says that writing about her experiences as a pilot and changes in the industry was ‘like therapy’.

Read this story in our September 2018 printed issue.

'My Heart At Zero Gravity: A Girl, A Plane and Their Story' is available now in e-book format and looks back over Dellonte's career flying the Piaggio Avanti for a small Italian operator between 1998 and 2010.

"I started to work for an operator at Bologna airport by chance, because at the time I was a ramp agent for another airline," she tells EBAN.

"A vacancy came up, and I didn’t know that the Piaggio was the aircraft in question. It was my desire to work more deeply in the executive aviation business. So I met the Piaggio by chance, and I loved it right away. At the time, that particular aircraft was not very well-known – the company I worked for was the only one in Italy flying the type. It only had one, but over the course of five or six years the business grew quickly, and we ended up having six Piaggios.

"In the beginning it was very exciting because the aircraft was not known, and all of the new passengers and clients loved it very much, because it was different. It was more comfortable and cheaper than similar aircraft and it had great performance too, so we were able to land and take off at short field airports."

She says that there was a great atmosphere around the aircraft and that she felt like part of a family with Piaggio. "I think that was the best part of the job. I had a very good experience as a pilot, because the aircraft is really nice to fly. It is easy yet honest; you can fly it by relying on technology but you can still feel the aircraft, which is not so common anymore. My colleagues reported the same: they really enjoyed flying it, and we all had the feeling of having a connection with the machine."

Dellonte stopped flying because changes occurred both in the company and in the wider industry. The company was sold so the management changed, as did her colleagues. This led her to move to France. "The main reason I stopped flying was that I was quite tired, and I didn’t want to be away from my family so much," she explains. "Executive flying is very demanding because you don’t have scheduled flights, so your phone is on all the time as you wait for the call, meaning you are unable to relax. You might have a programme for one week and then during that week things change. Perhaps you might have had plans with your family or something like that and you then have to rearrange.

"It is a very nice job but it does have some downsides compared with commercial airlines where you have a better idea of your schedule and you have definite ‘off’ days that are decided one month in advance. The executive aviation environment changes all the time as well. I started to feel a little homesick, and then the economic crisis happened.

"Eventually I received an offer from a commercial airline, but it was based in the Middle East, so that didn’t work for me either. The financial crisis was very severe in Europe, so there were very few jobs available; I decided to go back home."

Following the completion of a university degree, Dellonte became a flying school instructor and then headed to Manchester for a crew resource management (CRM) instructor course. "I now give classes to pilots from many different backgrounds and who fly different aircraft types. I work with a network of different flying schools in northern Italy and give classes on aspects of the ATPL."

The book developed from some articles she was writing for an American women pilot’s magazine. The readers enjoyed the articles about her life on the Piaggio, so the editors suggested she write a book about it. "This idea stayed in my mind for a couple of years and eventually I started to write. It was a process that I had to go through to help me accept the changes in my life. At first, it wasn’t easy to change my life completely, and it was difficult to feel comfortable with writing about it. But as I started to write, the uncomfortable feeling became less and less intense. It was like a kind of therapy. I felt the need to share my experiences as a woman pilot.

"At the beginning of the book I write about who I am and where I’m from, why I decided to be a pilot, how I became a Piaggio pilot, and then I talk about adventures and misadventures during my ten years of flying, both in the air and on the ground. The book ends with the reasons why I decided to stop flying.

"I wanted to share these experiences because in-between several things happened that changed me as a person. They never changed my love for flying though, which is still very strong. I thought it would be nice and also useful to share my experiences.

"Becoming a pilot was not easy and once I made my dream a reality, it was also often difficult to maintain it and defend it. I hope that sharing my experience will, above all, help younger generations to pursue their own desires and to never give up. Women should not be influenced by the preconceptions of family or society. Fight for what you believe in and be yourself."