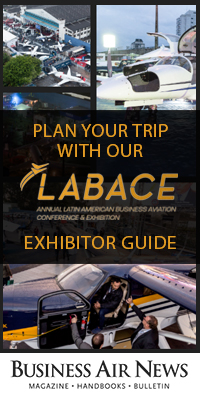 The Learjet 50 series was first announced at the 1977 Paris air show. Its design was based on the wing of the earlier Longhorn 28/29 series, married to a larger 10 seat fuselage. Construction of the Learjet 55 began in April 1978.

The first model flew on 19 April 1979 and production started March 1981. FAA certification was granted soon after and deliveries commenced in April.

The Learjet 55 was a low wing cantilever monoplane with winglets developed by NASA - the winglets gave rise to its Longhorn nickname - and a wing design based on the Learjet 25.

The aircraft has a T-tail and is powered by two Garrett TFE731 turbofans mounted either side of the rear fuselage, each providing 3,700 lbf of thrust. It has a retractable tricycle landing gear, an enclosed cabin for up to ten passengers and a cockpit for two crew.

A number of variants were introduced: the 55B with its digital flight deck, modified wings and improved interior, as well as higher take off weights as standard; the 55C with Delta Fins that gave it performance and handling advantages; the extended range 55C/ER with additional fuel in the tail cone; and the 55C/LR that introduced more fuel capacity.

Elliott ready to install latest Wi-Fi on Learjets
An Elliott Aviation STC applies to new Wi-Fi installations and allows for updates to existing installations that cover the bands A, B, G, N and AC. The company is offering it on a wide range of Learjets and the Hawker 750.
Read the full report

PWI's LEDs to light up more business aviation cabins
LEDs manufactured by PWI run at a much lower heat, so no more burned fingers, according to president and CEO Robi Lorik. The bulbs use 99 per cent less power than their incandescent counterparts.
Read the full report

Landing gear capability extended to Tennessee
Expansion of its Chattanooga facility has enabled maintenance provision by West Star Aviation to be extended to landing gear repair and overhaul for Phenoms, King Airs and Learjets.
Read the full report