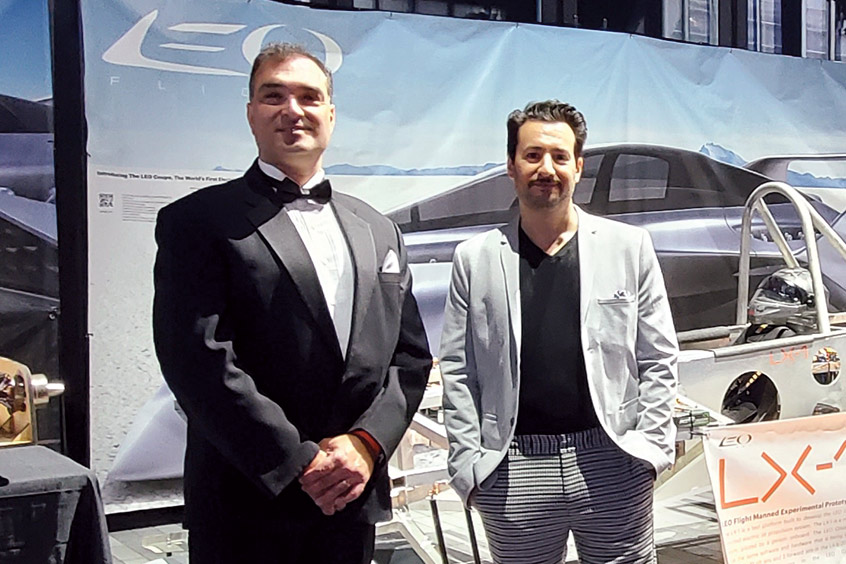 Pete Bitar and Carlos Salaff at the GreenTech Festival in NYC in September. 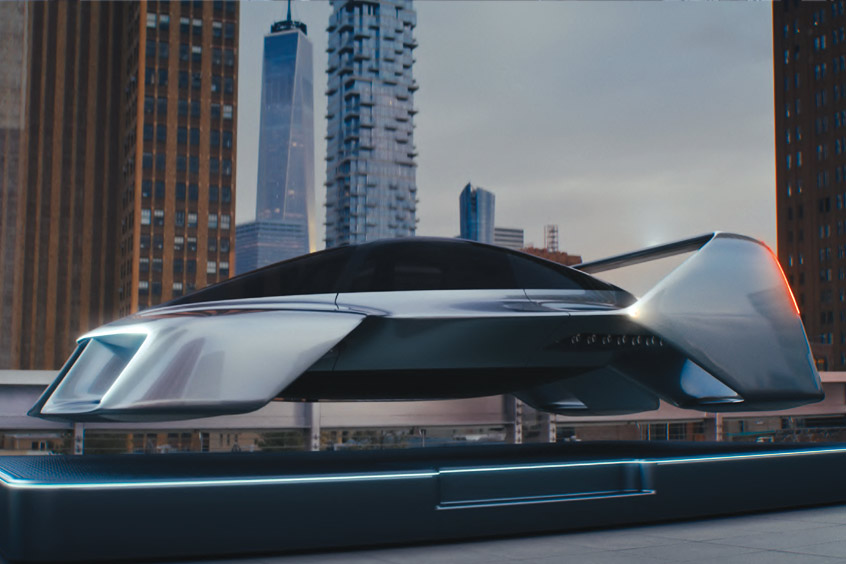 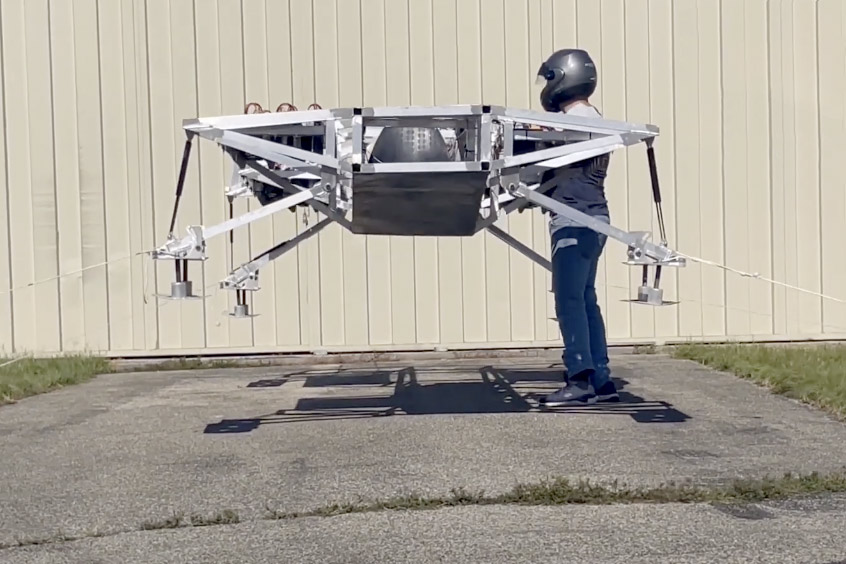 Indiana, USA-based Leo Flight achieved a tethered hover test of its Leo Coupe prototype. In development since 2020, the flying electric jet vehicle is relatable as an automobile rather than as an aircraft. With funding from a small seed round, the company built and began testing the LX-1 propulsion demonstrator and since last February has achieved unmanned and manned, tethered lift offs.

“The team is very capital efficient and hands on,” says Leo Flight co-founder Pete Bitar. “We are currently opening an additional seed funding round that will support additional tethered and untethered testing, facilities and staff. Additionally, this funding will go into developing a full scale Leo Coupe pre-production vehicle.”

Immediate target markets for this vehicle include first responders, HNWIs, agriculture and forestry, and ecotourism. “Long term, we'd like to see a Leo Coupe in every neighbourhood,” he says. “Air taxi operations will depend a lot on airspace restrictions and automated air traffic control infrastructure, which are currently being developed by governments. The Leo Coupe will be built with those systems ready to be activated and enabled.”

“With more than 200 engines we can afford to lose up to 60 engines and still take off and land safely,” says Bitar. “No one has anywhere near as much redundancy.”

The Leo Coupe will be governed by the new MOSAIC rules coming from the FAA in 2025. MOSAIC is the FAA’s path for incorporating new types of aircraft into the US airspace; crewed (special airworthiness aircraft) versus uncrewed, the eVTOLs, multicopters or tilt-wings as opposed to drones.

“It could fall under an expansion to the Light Sport Aircraft regs, but importantly, adding the ability for ‘limited commercial use’,” says Bitar. “Our first deliveries will coincide with that timeframe.

“Routes are not established or necessary, except in dense urban areas. Just as private flight currently exists without the need to file flight plans for many flights. This is all about airspace, and so the Leo Coupe will comply with all airspace regulations and limitations.”

All well and good for now, but how do the FAA and other regulatory bodies hope to manage an eVTOL skyway code when more than one of these flying cars are operational?

“It will be interesting to know how the FAA and NASA end up developing these ‘highways in the sky’,” says Bitar. “They have published concepts showing a heads up display in the windshield of the aircraft with a wireframe digital overlay of a ‘tube’ that the pilot would fly in, established by a digital, automated air traffic control system, from take off to landing. Since the Leo Coupe will be capable of full autonomy, the autopilot would sync to the digital highway established for that trip and would stay there unless overridden by the pilot.

“Even now, though, we would fly the same way a helicopter does in current airspace. We would have to be producing hundreds of thousands of units per year to get to the point where the skies, even over cities, would be remotely crowded, so this is a long term issue.”

Smaller than others in the eVTOL arena, the Leo Coupe is designed for both private ownership as well as commercial transportation. “Ultimately, we envision people using it more like a car than a plane,” he continues.

Bitar expects production to start at 100 units per year in the first year, growing to over 2,000 units per year by year five. He suggests a unit price of $459,900, with a cost per nautical mile dependent upon the cost of electricity.

“At an average rate of 15 cents per kilowatt-hour, our 66 kwh battery will cost $9.90 per full charge from zero or about $8.00 per hour. Maintenance is minimal, with only one moving part per motor, but estimated at $20 per hour for motor maintenance and depreciation/replacement for the whole vehicle. Depreciation is at least over a 30 year cycle, so roughly $15,330 per year. And basic insurance should be around $1,800 per year.

Of course there will need to be take off and landing pads, and Leo Flight is developing its own vertistop landing and charging pad concept that will allow for rapid charging and easily deployable infrastructure with a very small footprint. “It could be sited on existing infrastructure such as rooftops or driveways,” he notes, “without the need to use expensive vertiports.”

Leo Flight Corp was founded by Pete Bitar and Carlos Salaff in 2020. Bitar is also the founder, president and CEO of electric jet turbine propulsion systems developers Electric Jet Aircraft and AirBuoyant, and was the founder, owner and director of the Anderson Innovation Center, a private business incubator in Anderson, Indiana, as well as Xtreme Alternative Defense Systems (XADS), both of which he sold in 2018. He has been a consultant in the aerospace and defence sector for the financial services group Gerson-Lehrman for over 16 years. An honours graduate of Portland State University in Oregon, Bitar served in the US Air Force from 1985-1989, receiving an honourable discharge from the USAF Reserves in 1993.

After internships at Mazda and BMW and graduating from the Art Center College of Design in 2003, co-founder Carlos Salaff began his career at Mazda’s North American Design Studio. While there, he played a key role in the creation of several influential concept and production vehicles including the Nagare, Furai, Mazda 3 and MX-5. After a decade designing mass-produced vehicles, in 2013 he founded supercar design studio Salaff Automotive. 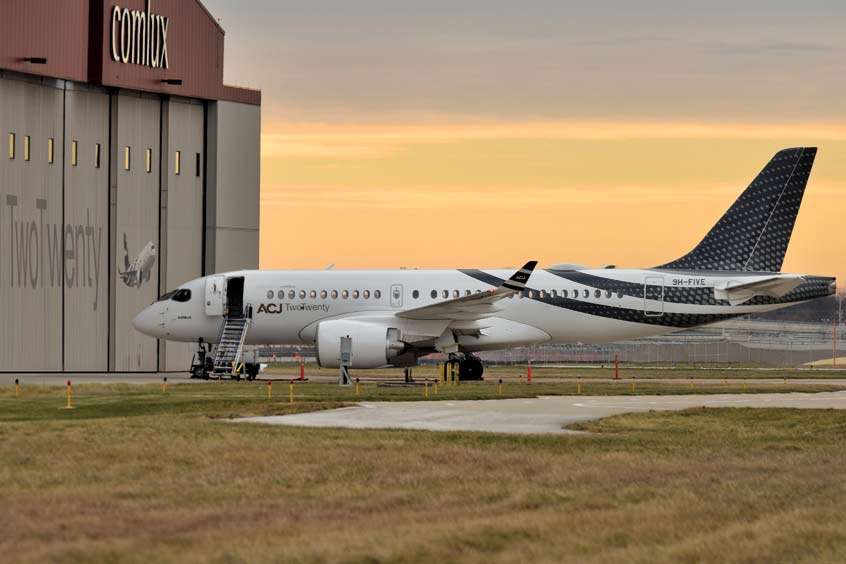 Comlux becomes first centre approved on ACJ TwoTwenty
Comlux Completion has accumulated an unmatched technical expertise that will allow it to support the ACJ TwoTwenty smoothly and efficiently as it enters into service at the beginning of 2023.
Read the full report