Read our latest feature:   Checklist: Aircraft finance
Vertical lists on NYSE following merger with Broadstone
Public shareholders can join PIPE investors in Vertical Aerospace now that trading has commenced on the NY stock exchange. The asset is the design, build, manufacture and aftersales of its VA-X4, a 200mph eVTOL. 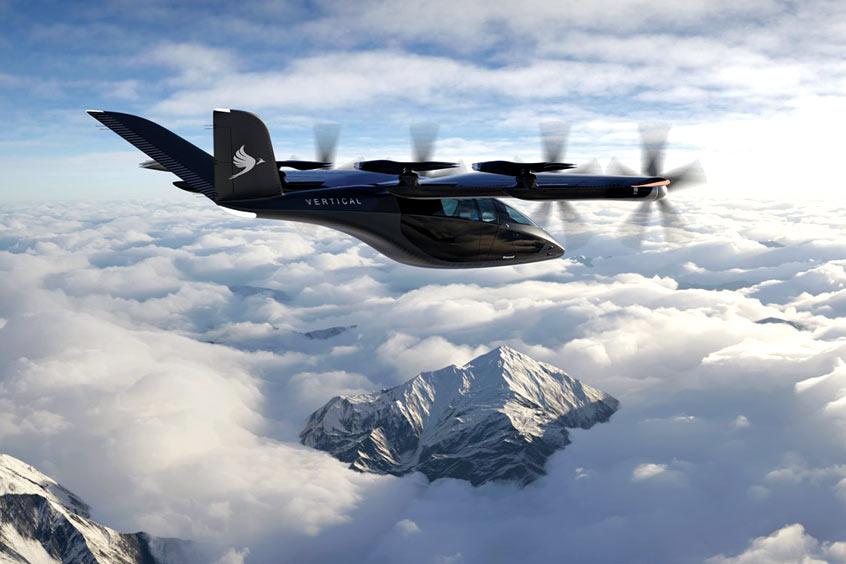 Trading in ordinary shares in Vertical Aerospace has commenced under the ticker EVTL on the New York Stock Exchange.

Read this story in our January 2022 printed issue.

Ordinary shares in UK aerospace and technology company Vertical Aerospace Group have commenced trading on the New York Stock Exchange under the ticker EVTL following the closing of its business with SPAC Broadstone Acquisition Corp. Founder and CEO Stephen Fitzpatrick says: “This listing is a landmark moment for Vertical Aerospace. We have global leaders in aviation as partners and a world class team that can make zero emissions flight a reality for millions of people around the world. It is fantastic to reach this milestone, and I am so proud of what the team has achieved.”

Broadstone chairman Hugh Osmond adds: “Vertical Aerospace is at the forefront of electric aviation, a fast-growing sector that will dramatically reimagine the entire aviation market. With the endorsement of key partners, suppliers and investors we are confident that our partnership with Stephen and Vertical’s gifted team of innovators will disrupt transportation over the next decade to come.”

Vertical recently received $205 million in funding led by Mudrick Capital, alongside new strategic agreements with Heathrow airport to explore the launch of VA-X4 services, and with global infrastructure operator Ferrovial to create a network of 25 vertiports. These vertiports will be integrated with other modes of transport to increase connectivity across the UK, and from which the VA-X4 aircraft will operate proposed services with Virgin Atlantic; the VA-X4 should be certified by 2024.

Virgin Atlantic chief executive Shai Weiss says: “Today is an exciting next step for our partners at Vertical Aerospace, and we want to congratulate it on reaching the milestone of today’s listing. We look forward to working together towards our collective mission to make short haul, zero emission electric vehicle connectivity across the UK a reality.”

The growing sustainability challenges of cities caused by urbanisation and a lack of transit options have increased investment from the private and public sector in the electrification of transportation, and Vertical sees the aviation sector, a market estimated at $1 trillion, as a key part of the transition. Vertical has a pre-order book for up to 1,350 of its piloted eVTOL VA-X4 aircraft, worth around $5.4 bn, from future operators such as American Airlines, Avolon, Bristow and Marubeni. The vehicle is projected to reach up to 200 mph, quietly and safely transporting four passengers at costs comparable to riding a taxi.

American Airlines has pre-ordered up to 250 VA-X4s, a potential commitment of $1 billion, and has an option to order an additional 100 aircraft. The airline also made a $25 million investment in Vertical through a private investment in public equity (PIPE) transaction. Chief financial officer Derek Kerr says: “I would like to congratulate Vertical on its listing a public company on the New York Stock Exchange. We are excited to partner with Vertical as we continue to work towards the development of emerging technologies that reduce carbon emissions in the aviation industry.”

Aircraft leasing company Avolon placed an order worth around $2 bn for up to 500 VA-X4 aircraft in June 2021. It has agreements with Japan Airlines for the purchase or lease of up to 50, and an option for a further 50, from its order book, with entry into service planned for Osaka Kansai Expo in 2025, and with Brazil-based airline Gol and transport operator Grupo Comporte to commercialise an eVTOL ride sharing platform in Brazil with the purchase or lease of up to 250 VA-X4s.

Avolon CEO Dómhnal Slattery says: “Today is an important milestone for Vertical on its journey, and we in Avolon are delighted to be part of it. In Vertical we have identified a team that shares our ambition to reshape air travel. It has the right aircraft, deep industry experience and the financing in place to achieve the highest global safety certification, and scale production to meet demand. Our confidence in the VX4 is underpinned by the level of demand we see in the market. We were the first lessor to order eVTOL aircraft with Vertical in June, the majority of those 500 VX4 aircraft are already placed. As we transition towards a net zero carbon economy, we are excited about the future for zero emissions aircraft and our partners Vertical will be, we believe, the long-term winner in the eVTOL sector.”

Bristow is to help Vertical identify efforts towards regulatory certification, infrastructure and environmental requirements for the aircraft, and will explore commercial taxi flights in new and emerging markets for operations in various geographic locations. It has ordered 25 aircraft and has an option for a further 25.

Integrated trading and investment business conglomerate Marubeni Corp has agreed a conditional pre-order option of up to 200 aircraft for the Japanese market.

A Rolls-Royce electrical power system will be integrated into the aircraft. R-R will design the system architecture, including the latest 100kW-class lift and push electrical propulsion units, the power distribution and the monitoring system that will support operations. Chief executive Warren East adds: “We are delighted Vertical has chosen to work with our technology. We have a joint ambition to lead the way in the exciting urban air mobility market, and our partnership reinforces our position as the leading supplier of all electric and hybrid electric propulsions systems for aviation.”

Vertical will use Honeywell’s Anthem cloud connected cockpit system; it supports growing levels of aircraft autonomy, leading to complete autonomous capabilities as regulations allow. The system is always on, so allows data to be transferred to the cockpit without the aircraft being powered up, and offers high levels of connectivity, an interface modelled after everyday smart devices and a scalable and customisable design. It is powered by a software platform that can be customised for most aircraft and AAM vehicles.

Honeywell president Mike Madsen says: “Honeywell and Vertical Aerospace envision an exciting and more sustainable new era of flight, powered by electricity. Vertical’s step forward today with the NYSE further proves we’re very close to that reality. Our state-of-the-art flight controls and avionics systems will help navigate Vertical’s VX4 electric aircraft. We’re thrilled to see how our work together shapes a new future for aviation with broadly adopted vehicles that are cleaner, smarter and more efficient than ever before.”

Microsoft is providing digital integration through Azure, a cloud computing system that will optimise vehicle operations such as maximising battery life, and support fleet management. Its venture fund M12 is an investor in Vertical. MD Matthew Goldstein says: “City populations continue to grow, and there’s a clear opportunity for urban air mobility together with eVTOLs to augment constrained transportation systems. What sets Vertical apart is their focus on what’s certifiable, not just what’s possible. Vertical is making important technology investments to realise trusted and sustainable aviation. We’re proud to support this world class team, pioneering the electrification of flight.”

GKN will provide the electrical wiring interconnection system and aero structures for the VA-X4, and Vertical continues to assemble and build its team of senior experienced engineers and seasoned aviation executives.

To celebrate the closing of the merger, Vertical rang the opening bell at the NYSE on Friday, 17 December, the same day as the Wright Brothers’ first flight 118 years ago. 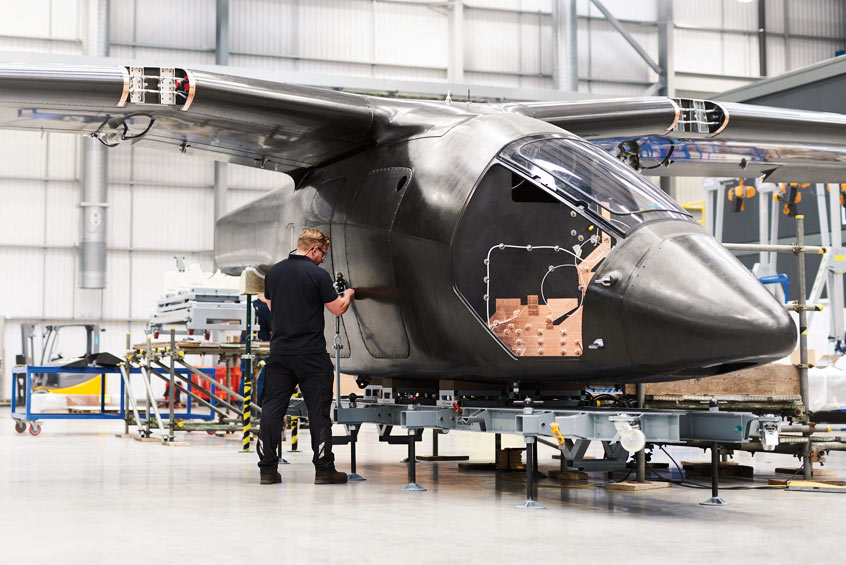 VX4 is high-wired at Bristol by GKN
GKN has assembled and delivered the electrical wiring interconnection and the high voltage high power interconnection systems that run power from the batteries to the EPU for the VX4.
Read the full report 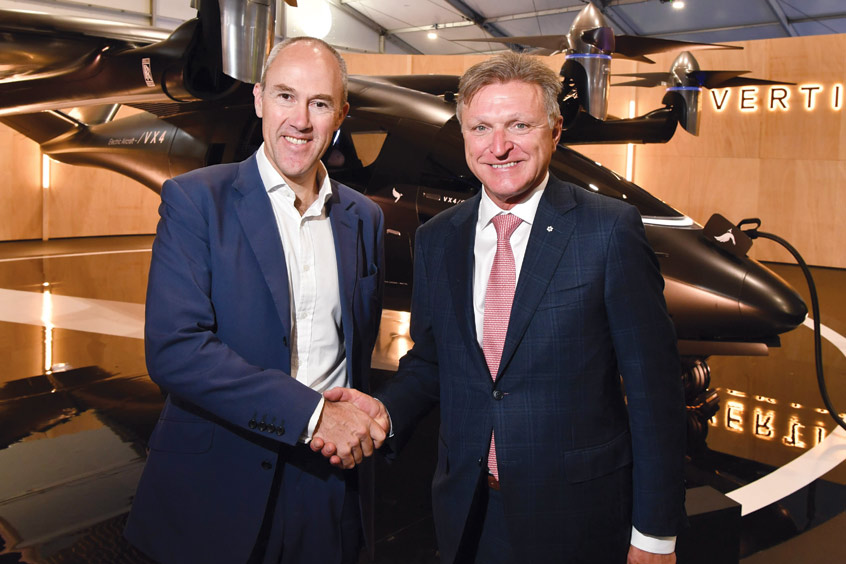 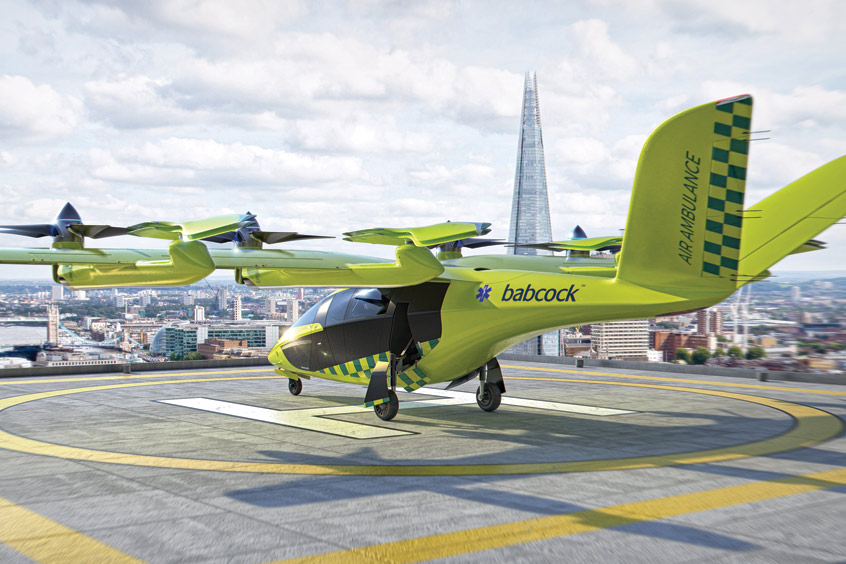 Babcock to explore VX4 variants with Vertical
Vertical’s VX4 is to be reviewed for aerial EMS and cargo transportation. Babcock will lend its expertise as a business with extensive EMS and MRO experience, and will help develop MRO capabilities for the aircraft.
Read the full report