Diamond Sky extends its reach across Europe
Diamond Sky has been as productive as possible during the pandemic. Not only has it added an Airbus Helicopters H135, it has also branched out into the heart of Europe by adding a Belgium-based aircraft. 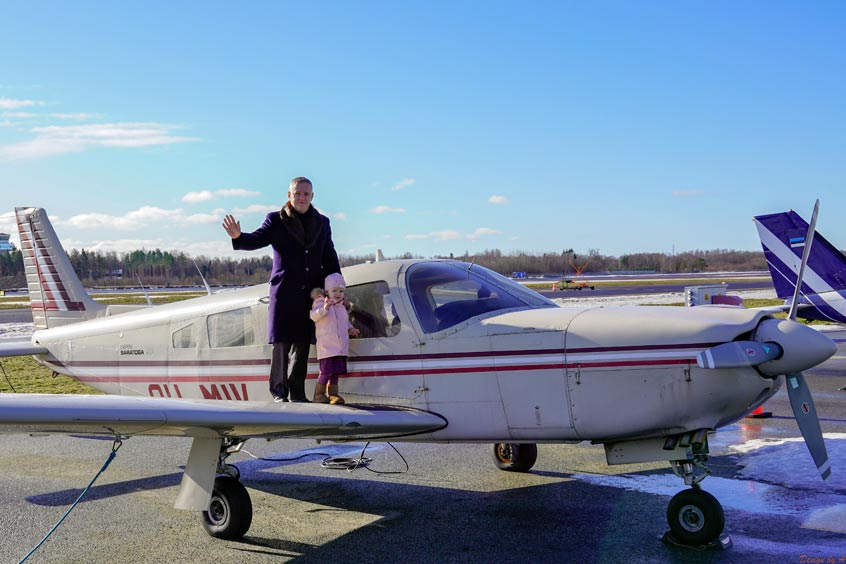 Ken Koort and his daughter prepare to depart in a Piper Saratoga.

Tallinn, Estonia-headquartered Diamond Sky says that the business aviation market is growing in its part of the world, with increasing numbers of people buying new fixed wing aircraft and helicopters. “Maybe it is because of the COVID outbreak; people cannot travel as easily as they used to travel,” comments president and CEO Ken Koort. “But either way, I see the market in Scandinavia, for example, as more active than it was two or three years ago. In Estonia, we received an Airbus Helicopters 135 at the end of last year, and we are currently adding it to our AOC. As a helicopter, it’s one-of-a-kind, in Estonia or even in the region. It actually came from the UK, where there are many of them flying around. In Estonia, Latvia and Finland, it’s unique and quite rare. Our customers in Finland, which is 15 minutes away, and Latvia have been showing an interest in chartering the helicopter for several purposes. Of course, at the moment we don’t see so many concerts and celebrities are not flying a lot but heads of states, prime ministers and other ministers are – the demand will be there.”

Often, helicopters used for private flying and even small commercial flying are single-engine. The H135 is a twin-engine, making it very powerful. “You can fly over the sea with only minor concern,” Koort continues. “Some people think it’s a waste of money to add another engine for that small a helicopter, but it depends on which angle you look at it from. In terms of client comfort and satisfaction, the client is happier to fly in a plane or a helicopter that has two engines. It’s a psychological matter.”

He doesn't foresee any HEMS missions with the type: “Of course, we can still help the government if someone is missing, we can search for them. But mostly we will be taking high end, high-value individuals from point A to point B for their meetings. The Estonian and Finnish capital cities are the two closest capitals in Europe, only 60km apart, and Helsinki airport is quite far from the city centre. If you have a business meeting in Helsinki or Tallinn, it makes it very easy to fly from centre to centre. This really plays into the hands of the helicopter, saving so much time and making life easier. In recent times, our fleet has tripled, and it is diverse. This is good, because there is all sorts of demand out there, starting from the Robinson R44s all the way up to a Global Express. We are just adding a Learjet 60XR to our fleet, which will begin operating next week. We’ve had an interesting time despite the crisis.”

The company is about to add its first aircraft in Belgium, having a signed contract with an aircraft based there, and is therefore expanding into the heart of Europe. The organisation also recently opened a daughter company in Latvia, in the capital Riga. “I’m planning to have the same kind of structure that I have here, but maybe even bigger, as Riga is becoming more like an aviation hub here in the Baltics,” Koort reveals. “Estonia, Latvia and Lithuania are similar countries in terms of operations. Maybe we are the smallest, but we have around 10 AOC companies, whereas Latvia only has four. We have quite a number of clients willing to put their aircraft under the Latvian registry, so that’s why we’ve opened the company.

“It’s been challenging in COVID times, but we’ve managed to pull it off. We have big plans, and we are moving pretty fast. Expanding across Europe is good for us. We are even taking some requests from the UK. Brexit might actually bring some business for European companies, for those who want to place an aircraft in Europe.”