Read our latest feature:   Bonus distribution: ACE'22
Faradair lands at Duxford to boost UK manufacturing
Faradair has ambitious plans for its BEHA (Bio Electric Hybrid Aircraft), with first flight due in 2023/24. The UK government is committed to a green recovery from the COVID-19 pandemic, and has praised Faradair's work. 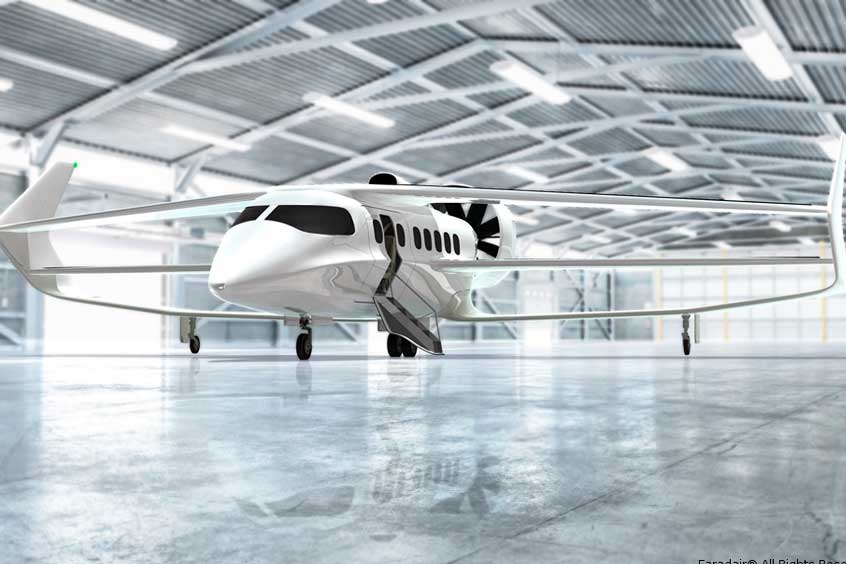 BEHA will specialise in regional transportation.

Faradair is relocating its headquarters and sustainable aircraft prototype development to Duxford airfield in Cambridgeshire, in collaboration with the Imperial War Museum (IWM) Duxford and Gonville & Caius College.

Faradair intends to revive whole aerospace manufacturing with a UK-designed and developed aircraft, creating jobs and revenue locally and Internationally. It hopes that the aircraft could provide air commuters with a financially attractive and time saving alternative to expensive and congested land based modes of transport.

With the first BEHA flight targeted for 2023/24 Faradair is honoured to be the first aviation company to join Gonville & Caius College and IWM's Duxford AvTech development which will create an aviation research and development facility at the well-known airfield.

The UK government is committed to a green recovery from the COVID-19 pandemic, with specific mention and interest in sustainable air transport. Faradair secured the support of current Secretary of State for Transport Grant Shapps MP back in 2018 saying “Faradair reminds us of our history in aerospace innovation and how we may rebuild aircraft manufacturing facilities from general aviation airfields. I genuinely believe the Faradair BEHA is an exciting opportunity for the UK in both civilian and non-civilian configuration, and I hope we will see this new aerospace manufacturer grow, develop and create jobs with the appropriate backing and funding to prove that the UK can continue to design and build world class, whole aircraft systems.”

MD of Faradair Neil Cloughley adds: “Moving to Duxford airfield is a dream come true for us at Faradair. We are so excited by the opportunity ahead of us, made possible by the fantastic and enthusiastic staff at the Imperial War Museum Duxford and Gonville & Caius College. COVID-19 has highlighted the global opportunity for cleaner, quieter skies and more sustainable forms of transport, a vision our company has championed for many years now.

“It is such a privilege to be able to call Duxford home. IWM Duxford will now not only be a site of historical significance but also a site on which to showcase the future of aerospace. We will create jobs and inspire the thousands of school kids that visit every year to take up STEM subjects with clear future employment opportunities with the company.

“In addition, the opportunity to work in the innovation environment of Cambridge and with a college that has a superb plan for the Duxford Avtech development is a genuine honour for us, and we look forward to meeting local officials and potential new partners in the Cambridgeshire region. Whilst the aircraft will provide viable alternative to overcrowded and overpriced trains today in a civilian role, this sustainable utility aircraft will also perform non-civilian roles, providing increased capability, for better value operations.”