Read our latest feature:   Bonus distribution: ACE'22
UK Malibu pilots set for new world record
Two British pilots have flown a Piper Malibu to 16 countries in just 24 hours. As well as setting a new world record, they are highlighting the importance of local airfields that are increasingly facing closures. 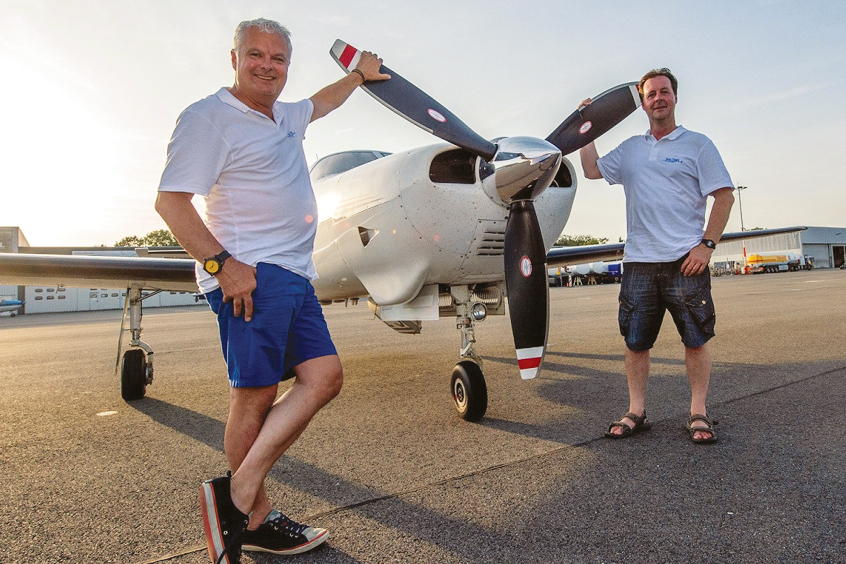 Roberts, owner of flying club and flight training school Take Flight Aviation based at Wellesbourne airfield in Warwickshire, and Rogers, a B737 captain based at Birmingham airport, undertook the challenge on Tuesday, 25 June. They now await formal verification of their feat from the Guinness World Record organisation, which currently lists as 11 the most countries visited by fixed wing aircraft in 24 hrs, achieved by James van der Hoorn and Iain Macleod in 2010.

As well as fulfilling a personal challenge, Roberts and Rogers embarked on the initiative to raise awareness of the ongoing campaign to save Wellesbourne Airfield, which since 2015 has been under threat from closure from its landlords despite the local authority's attempts to purchase it and retain its current use.

“In doing this trip and taking in 16 countries, we wanted to demonstrate how Europe can be served by general aviation aircraft, for business and leisure, and raise awareness of the terrific standards many GA airfields offer,” says Roberts. “We are passionate in our belief that preserving local airports is vital for Great Britain plc, for the training of future pilots and also for the inevitable role they will be able to play in supporting the next generation of aircraft, including hybrid and electric models, that don't require the infrastructure and cost of big airports.”

“We didn't want to just beat the 2010 world record, but to beat it by a substantial margin,” adds Rogers. “The 2008-built Piper Malibu averaged a cruise speed of 190 mph and its performance was outstanding.”

Their journey commenced with a night departure from Denmark's Roskilde airport near Copenhagen at 3.30am local time, visiting Sweden as the sun rose before returning to Denmark briefly and onwards to Poland, the Czech Republic, Slovakia, Hungary, Croatia, Slovenia, Italy, Austria, Switzerland, Germany, Luxembourg, Netherlands, Belgium and France.

“We chose to contact several airports in each country so we could build an optimum route based on who could accommodate us and what facilities were available in terms of runway surface and length, fuel, customs and operational hours, and were pleased to receive a positive and friendly response from everyone. Maastricht Aachen airport in the Netherlands was especially enthusiastic with its fire crew honouring our arrival with a water cannon salute. By then, we knew we had broken the existing world record,” says Rogers.

The pair gave themselves 24 hours to complete the 1,700 plus mile flight. Over half the time was spent in the air, allowing a further eight to 12 hours on the ground for refuelling, airport handling, customs and the rest.

The pair also faced record temperatures in central Europe with 38 celsius on the ground in Italy and staggering outside air temperatures of over 30 celsius in the air.

Delays with customs in Hungary and gaining permissions in France as well as the weather closing in at home meant that the final 17th leg was dropped, so the pair took time out to relax in Lille.

“The response to our challenge was very positive and we were heartened to see people waiting to greet us from 4.00 am in Sweden. We were welcomed with many fantastic facilities geared to handle general aviation which could certainly be replicated by Stratford District Council at Wellesbourne,” Roberts suggests.

Stratford District Council are in the process of a compulsory purchase of the airfield to maintain its aviation use. Meanwhile, some of the remaining tenants are taking action in the Court of Appeal to try and maintain their tenancies and overturn a previous ruling, which went against them.

The two men have broken world records before. They currently hold the Guinness World Record for the greatest number of airfields visited in 24 hours, when they landed at 87 airfields in the UK in a Cessna C172 in 2017.